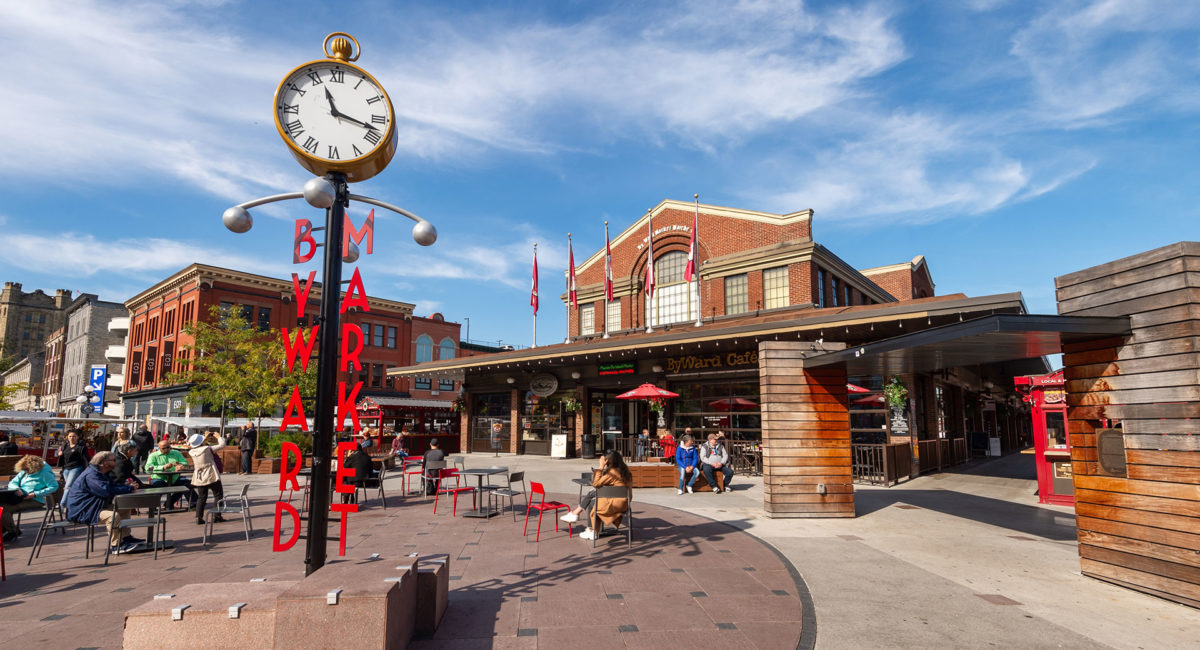 On February 1st, Ottawa’s Finance and Economic Development Committee approved the ByWard Market Public Realm Plan. This is the culmination of years of consultation and work to engage the public in the design and revamping of this historic civic space. The next steps are for City Council to approve the Committee’s recommendation. The Plan, even if approved will still face challenges.

The design vision presented is modest. Its focus continues the tradition of prioritizing cars. The images presented reflect consistency with the Elgin Street use of “tabletop parking” and flex-space. The design relies on bollards to separate pedestrians from cars making the spaces less accessible in winter. This is consistent with the snow clearing challenges on Mackenzie avenue, inhibiting accessibility and year-round use of public space.

The Plan presented makes most streets 3.5m wide. Lane width is a factor in how comfortable drivers are with speeding. Promoting slow speeds means narrowing the lanes, introducing raised pedestrian crossings, and making pedestrians the priority. This is successful if the streets are designed as woonerfs, a Dutch-style of street where driving is restricted to walking speed.

This report likely cost hundreds of thousands of dollars. It joins reports done in 2004 and 2015, 2016 and 2017 on which no appreciable action has been taken. The 2020 approval contains no funding mechanism and an implementation plan of $129 million. The hope is that design and construction dollars will come from federal or provincial funding. The report also recommends a public-private partnership (P3) as a funding mechanism. We only have to look at the failed P3 models to see that P3 will privatize a public asset, cost more and lead to mediocre results.

The approved report is said to be driven by extensive public consultation. The approved report notes that consultation was undertaken with four community working group meetings, but four times as many meetings were held with business owners than the community. The City’s own “as we heard it” report includes 857 responses to the question, “How do we achieve your vision?” Half wanted the creation of pedestrian-only zones, removal of parking from the core of the market, and better cycling facilities.

The final report notes that it ensures “pedestrian and cycling modes were considered and prioritized, but in balance with transit and vehicular travel,” and that the design “has attempted to strike a balance between all street users,” but retains a priority on cars and parking. The study area includes 3km of streets, of which 200m (2 blocks, separated by a street) is pedestrian-only. Strong public input that results in less than 10% results doesn’t suggest the balance that was achieved.

The plan as presented is consistent with the failed projects previously approved. What can we do differently?

The report calls for a design competition for the intersection of Rideau and Sussex. Design competitions should become the norm. They can be used to spur a broad public conversation about the future and be the key to successful public spaces. For example, the success of the Halifax Public Library was directly related to the design process, which started with a competition. A design competition for destination buildings and further development of report implementation will be essential to success and public engagement.

Consider Toronto’s historic Distillery District; A pedestrianized public space surrounded by heritage buildings that is regarded as Canada’s premier arts, culture, and entertainment district. People throng to the area year-round, and it is a successful place for businesses. Modern residential development provides a critical mass of regular foot traffic, and all the parking is off-site or underground. The place feels safe and is inviting. Should we want any less for the ByWard Market?

The City can explore funding tools within its mandate: vacant building fees, expropriation of derelict property, and progressive increases in taxation of surface parking lots combined with incentives, such as deferral or waiver of development charges, can promote development. Select areas could be the subject of design competitions to be sold to developers, such as the Edmonton Missing Middle Competition. Rejecting the privatization of public assets is essential if we want to learn from our mistakes and ensure we have a positive, lasting legacy for future generations.

A progressive, bolder design for the public realm is necessary. We should link the implementation of the Public Realm Plan to other City policy objectives, including our new Official Plan. Vision Zero, 15-minute neighborhoods, better urban design, and use of sustainable transportation are all possible in a #BetterByWardMarket. Located next to the Rideau LRT, and walkable to other transit and most of downtown, the Market could be an incubator for testing how to support small businesses in a post-COVID economy, creating the walkable, sustainable community we aspire to.

The ByWard Market holds a special place in Ottawa’s heart. Let’s set a bold vision for excellence and open the door to innovative and creative designs that focus on people.

A Place for People Not Parking

This Is Part of the Problem

We Can Do Better