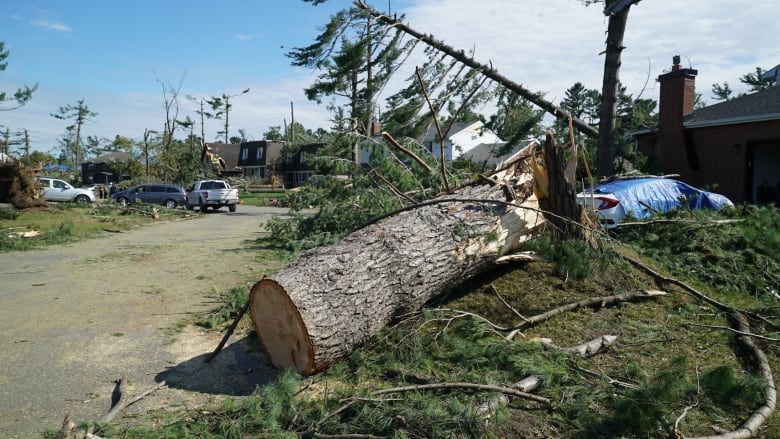 On Friday, September 21, 2018, the nation’s capital was hit with six tornadoes. The hardest hit areas were Gatineau and the west end of Ottawa including Dunrobin.

After this natural disaster, I believe that people will take tornado warnings far more seriously than in the past. I hope too that people will prepare emergency kits for their houses including water, batteries, flashlights, food and medicine. While at Sobeys in downtown Ottawa on Saturday, an employee of Architects DCA noted the long lineups and that not many people were prepared for the power outages across the city.

It has been truly heartwarming to hear of the support that people have offered to those who were out of power for more than 24 hours, some people still without power days later. The Red Cross, Ottawa Senators and the Salvation Army thrift stores are accepting donations for those impacted by the tornadoes.

Let’s not kid ourselves. This isn’t a freak event, but a trend: climate change is not just “global warming” and thinking our summers are going to be nicer, and winters less cold: climate change means more extreme weather, of all kinds. In the last decade, we’ve had extreme heat, cold, rain and wind. Trends are that this will continue: we’ll see more extremes. When Toronto gets a 1 in 100 year flood every few years, this isn’t a statistical anomaly, it’s the new norm.

So how, as communities and architects, do we build resilience?

On September 24, the Ottawa-Carleton District School Board closed schools in the area. From their statement, “Given the significant number of schools that remain without power, and the continued repair work needed in our schools, we feel that this is the best way to ensure student and staff safety.”

Why aren’t we building or updating our schools to withstand environmental impact? The organization Fix Our Schools believes that, “…every publicly funded school in Ontario ought to be a safe, healthy, well-maintained building that provides an environment conducive to learning and working.” This organization is working to bring awareness to the need for well-built schools. They can then act as community havens for those in need after environmental disasters such as the tornadoes in the Ottawa area. But when there is a $15 billion backlog of repairs across the province, not only do these schools suffer, but they’re more likely to be damaged, and the places of safety within our communities become liabilities.

We also have to think about where we’re building. When we know that a river has a flood plain, and we allow development to happen within that same flood plain, we’re risking people’s lives, and the economic prosperity of residents. We can do all the calculations we want, and plan fail safes, backups and all, but 10, 30 or 80 years later, the flooding will happen. Just look at the Globe and Mail article, Big river, deep trouble: Can the Mighty Mississippi’s crisis be averted? The river, and the people who live along it, are in trouble.

So in Ottawa, we need to think: are we going to allow communities to continue extending ever further? Making it harder, and more expensive, to bring in services? Are we going to continue to allow homes to be built in so called “reclaimed flood plains” knowing that the inevitable flooding will happen? What steps can we take to protect homes that are already there?

A basic step, and one we’ve specified on homes, is the use of hurricane ties to keep the roof on in the event of uplift pressure from wind. This should be a code requirement, but costs money. Hopefully more builders see this as a value added benefit and put them in anyway.

We need holistic solutions: when we’re rebuilding a street, or creating a new community, we need to bury the overhead lines as a matter of course, not as a last minute decision as a result of supposed budget windfall. We might not be able to bury all the high voltage lines feeding the grid, but we should be able to bury the majority of them. That would reduce the potential for damage, open existing communities to more redevelopment and provide better safety. We need to build more intensely, in smart ways, on existing developed, serviced, land, and reduce sprawl, especially into vulnerable areas like flood plains.