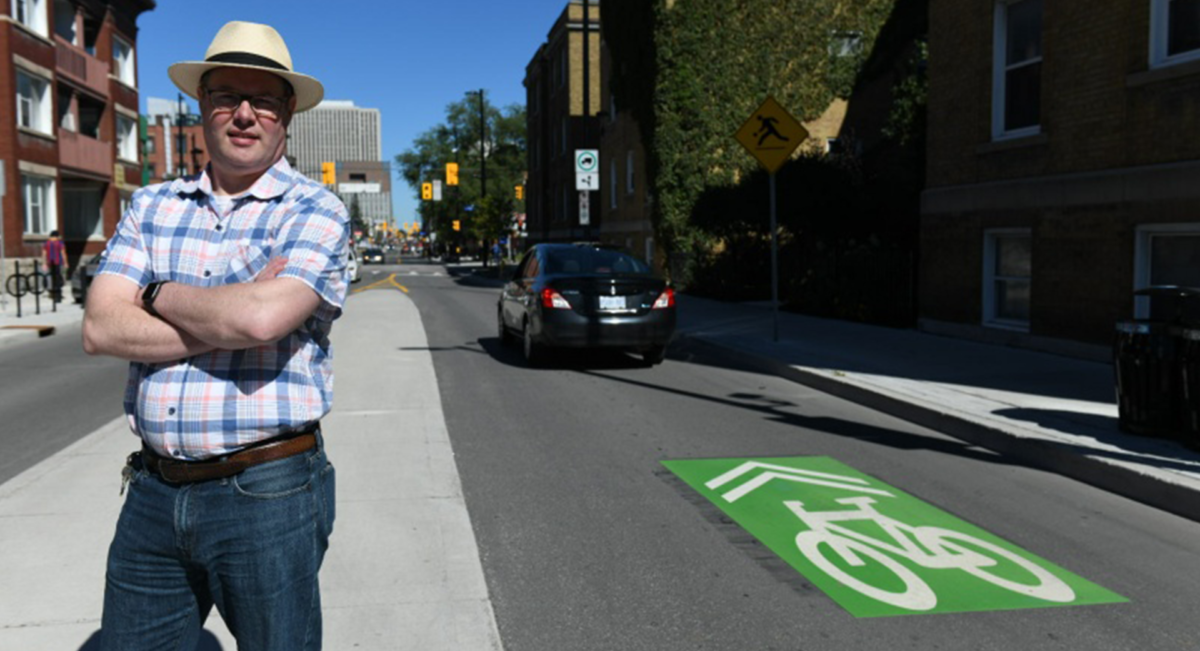 Cognitive dissonance is the mental discomfort that comes from holding two conflicting beliefs, values or attitudes. It is part of a social psychology theory that tries to explain a disconnect between a person’s behaviours and their beliefs.

When you know that cigarettes cause cancer, but decide to start smoking anyway, this is an example of cognitive dissonance. It isn’t hypocrisy. That would be telling other people not to smoke while you are puffing away. Hypocrisy is often easier to point out and resolve.  Recognizing cognitive dissonance can often mean being confronted with one’s decision making process and understanding the underlying reasons for dissonance.

Ottawa, like many cities, experiences cognitive dissonance. We need to rethink what we are doing, and how, if we are serious about being the most livable mid-sized city in North America. After all, that is the point of our new Official Plan.

To see how this is playing out in Ottawa, one needs to look no further than Elgin Street, where several years of reconstruction work (following extensive design work and public consultations, which Jordan Moffat skillfully analyzes and critiques here) has wrapped up. Much of the public input was ignored or rejected.

In June, a cyclist was severely injured on Elgin, in the exact manner predicted. Anecdotal feedback from cyclists has been that the super-sharrows are a miserable experience, and that the street is not a pleasant place to commute by bike, nor by car.

At the same time, the City is celebrating the completion of the work as an example of its commitment to excellence and investment in cycling infrastructure. This is cognitive dissonance: the city-as-government states it has done well but the city-as-people states the experience is poor.

A similar disconnect was on display in the Glebe this spring. As public demand for safe public spaces increased amid the pandemic, many residents proposed one lane of Bank Street be closed to vehicles to give cyclists and pedestrians more space.

This would have been consistent with moves made by other great world-class cities that created pop-up bike lanes, public spaces and supported local merchants while meeting the physical distancing requirements of our new normal.

Despite strong public and political will, the idea was quashed by the local BIA and some political leaders, even though a large city-owned parking garage sits nearly empty nearby.

This is cognitive dissonance: We say we want to be a world-class city and create a great, walkable, bikeable, 15-minute neighborhood, but actively prevent local residents and their elected officials from taking action.

Over the last 16 years, more than $2.5 million has been spent on at least five different studies of the ByWard Market. Countless others have weighed in, not the least of whom was our firm’s own 2018 pro-bono design study.

Anecdotal evidence and organized input has been overwhelmingly clear: To make the ByWard Market better, we need less on-street parking, more places for people to walk and enjoy a high quality public realm as well as support the farmers market and other merchants. In 2020, we have a much-diminished farmers market and by 2021, there may be no market left at all.

Cognitive dissonance is our city’s belief that more studies, more meetings and more hand-wringing will solve this problem when the solution has been proposed, studied and has active public support.

In short, the conflict is that we say we want to achieve something with one voice (better cycling infrastructure, walkable 15-minute neighborhoods as well as respect and preservation of our social and built heritage), but then actively undermine our aspirations by working against our goals by implementing poor designs, allowing narrow business interest to override the needs and desires of residents and failing to take meaningful action in a timely way.

How do we resolve this?

The solutions are complex and may need a wholesale rethink of our approach to problem solving.

One place to start is how the city budgets expenses. It funds new buildings with a capital budget while maintenance is covered in a separate operating budget. There is little incentive to build a more durable and sustainable city-owned building if it exceeds a capital target. Resolving this means understanding and rethinking how we approach our city budget: It isn’t just the division of capital and operating costs, but merging these two budgets to better understand the decision-making process that affects budgets as a whole.

We state a belief in design excellence, but award contracts for design based on low fees (which translates to low effort). Private-sector development is incentivized to strive for mediocrity while excellence, innovation and creativity are not supported. Some City planning staff insist on imposing their own design ideas, holding up applications or denigrating design submissions for months or years.

We may need to rethink who is making the decisions, and how we can create policies – and actions – that achieve our aspirations. We might, for example, create a role for a city architect who participates in design projects, focusing on the creation of places for people. This champion for design could challenge city-retained consultants to come up with better solutions, lead public workshops and promote excellence in the built environment. Such is the model in Edmonton, recipient of one-quarter of all of Canada’s 2020 Governor General’s Awards in Architecture. Edmonton’s City Architect has also reformed how they hire architects and engineers, stressing design excellence and innovation to deliver better value.

There are no short-term, quick fixes. But if we want to bridge the conflict between what we say and what we do, and become the city we aspire to, then we need to start somewhere.

Understanding the conflict between our aspirations and our actions is a key first step. Once we recognize it, we can take steps to resolve the conflict. The time to start is now.